Photo: Gay Gamer Pride Flag made by Got to Geek
Written By: Matthew Samples

Though it may not seem like it, LGBT characters have been around in gaming for a long time. The only reason it seems like they’re more prominent now than ever is due to the worldwide change that has finally taken hold of the Games industry. The representation of LGBT characters in video games has been…rough to say the least. In the early days of the 80’s and 90’s, homosexual characters were minor and heavily stereotyped beyond recognition. But now with acceptance becoming more widespread and people accepting themselves the way they are, maybe it’s time to take a small look back to see a few examples of LGBT characters from recent years.

I’ll be sticking with games that I’ve played myself since otherwise we would be here all day. Kicking things off we have one of my personal favorites.

“You cannot stop us, we will have our New World.”

Our first person is a very morally grey individual with an admirable goal in sight, but the methods he employs in pursuit of it are very wrong. “Compassion. Mercy. Tolerance. These words mean nothing to any you!… So I’ve pledged myself to another cause… One which all people may live side by side, In peace.” Abu’l Nuqoud is a Templar in Damascus during 1191, and while there isn’t a neon sign pointing to him saying he’s gay, it definitely doesn’t take much to connect those dots.

During the speech leading up to his assassination he speaks of being shunned and hated for simply being different, but what’s different about him? He’s simply fat, until you begin reading into his words and actions. Throughout the speech he speaks of the people who judge him for his very nature and begins to walk to his guard. While with his guard he places his hand upon his arm and looks longingly at him for a few moments too long. When taken independently and at face value this doesn’t add up to much, but added with the context of his speech, it may prove that he is hated and ridiculed for being gay. But I believe the strongest evidence lies in what he says once you’ve assassinated him. He refuses to pay service to a God that calls him an abomination; once again, by itself it doesn’t mean much. However, when brought together and put on display in 1191, it seems to send a pretty strong message.

Now that we’ve gotten that out of the way, let’s talk about his moral ambiguity. Everything I’ve told you so thus far simply paints him as a man who has chosen to speak out against the people and Gods who despise him. However, his actions are what condemn him in the eyes of (video game) history. He’s lured in by the Templar’s goal for world peace not and while with the order he becomes over whelmed with the idea that he cannot be touched anyone who opposes him. That’s when he decides to throw a party for the city where all are invited, supplying them with food and wine. Moments after the fist cup of wine is drank bodies begin to fall as they convulse and foam from the mouth. Those who remain are ordered to be killed with a down pour of arrows from Abu’l Nuquod’s guards. Instead of trying to use his great wealth and influence to enact a change of hearts and minds within Damascus, he chose to punish the people with death.

Abu’l is a very interesting character, and deeper than you may think upon a first play through of the game. Although it is regrettable that he fell into the “evil gay” character that seems to happen fairly often. I appreciate the the layers that this minor character has, and the fact that he wasn’t presented as obviously gay. I’d say he was a step in the right direction during the time of the game’s release. 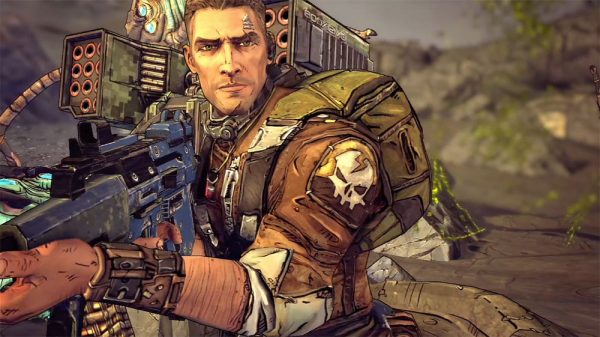 Axton’s sexuality is a short but sweet story that shows what happens when a developer runs with an idea and refuses to let the gaming haters stop it. Axton is one of six playable characters in Borderlands 2 and pretty much falls into a more Call of Duty-esque play style. The majority of his skill tree improves the amount of damage he and his deploy-able turret does, as well as reload speed, and other supplementary perks. He’s big, bad, and accidentally bisexual…. yes, I said accidentally. You see, during development the four playable characters at the time were going to have gender specific dialog while healing or being healed by players allowing for the occasional flirt while picking up your bleeding waifu. However, this was scrapped with all characters for one reason or another, except for Axton who, due to a programming bug, would hit on anyone that healed him regardless of the healer’s gender. When writers at Gearbox Studios began hearing about this they at first told players that it was just a programming oversight. However, when many gamers gave a collective sigh the writers decided to make it canon, and began writing more lines, forever cementing Axton as a bisexual badass.

While it’s a little sad that Axton wasn’t created with the intent of being bisexual, it really says a lot that Gearbox was willing to take a goof and make it fully canonical despite a smaller vocal group of gamers feeling they had been duped into playing a “gay dude.” And Axton isn’t the only gay character in the series; Sir Hammerlock is gay, Mister Torgue and Mad Moxxi are also Bi, and Tiny Tina is a lesbian. Does any of it effect the story of the game? Not at all; it simply goes a long way to show that games can have more than just a straight white guy doing cool things. We can also have a young lesbian who’s obsessed with explosives, blasting baddies at every turn. Speaking of young lesbians, let’s move on to my personal favorite game and character.

“After all we’ve been through. Everything that I’ve done. It can’t be for nothing!”

Ellie is a young girl born into a broken world that’s begun to tear itself apart. When it’s learned that she’s the only known survivor of a bite by infected, a group called the fireflies reaches out to a survivor by the name of Joel and tasks him with getting Ellie to a lab where they can then attempt to extract whatever keeps her from becoming infected. But it’s not until the Left Behind DLC that we get to learn more intimate details about Ellie prior to her bite and subsequent journey with Joel. Within this prequel we get to see Ellie exploring and having fun with her best friend, Riley, who will be the subject of many of Ellie’s stories in the future. During their exploration we see the two young girls grow closer together, trusting one another more and more, culminating in a touching first kiss for the young girls. It’s a beautiful first love story that treats it’s gay characters with the love and respect that they deserve as humans. The Last of Us is perhaps the best example of a game that humanizes every aspect of the people involved; bandits exist because of their desperation and lack of another choice, Joel is torn between his will to keep going and his urge to re-join the daughter he lost. Ellie is defined by her actions and caring nature, willingness to enter the fray when others would shudder at the thought, and the ability to show restraint when humanity is needed over violence.

That’s a very small look a some games I feel helped to push good LGBT characters in video games, and after seeing the latest E3 presentations, I feel as though the future will only get brighter. It’s a better time for LGBT in gaming.